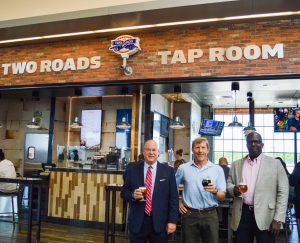 Tyrone Davis, Senior Director of Operations at The Michell Group

JUNE 22, 2017 – Two Roads Brewing Company and the Connecticut Airport Authority are pleased to announce the opening of Two Roads Tap Room at Bradley International Airport. The Tap Room, which is located post-TSA screening, was opened in conjunction with The Michell Group, Bradley’s restaurant operator, and is modeled after the brewery’s tasting room in Stratford, CT.

“It is a beautiful replica of our tasting room in Stratford, including wood floors, industrial light fixtures, and a large mural of our brewing tanks. Even the bar top is made from the same wood blocks once used on the floor of our 100-year-old building,” said Two Roads CEO and Co-Founder Brad Hittle. “It took a strong commitment from Two Roads, the Connecticut Airport Authority, the Michell Group, F. Panza Construction and the entire staff of the Tap Room to stay true to the look and feel of the brewery. The end result is a tap room where patrons feel as though they are sitting at the brewery tasting room itself (while enjoying some exceptional beer and food I might add!). I want to thank each of these teams for their commitment to authenticity and quality.”

“We are pleased to welcome Two Roads and to introduce the Tap Room to our passengers,” said Kevin A. Dillon, A.A.E., Executive Director of the Connecticut Airport Authority. “At Bradley, we want our passengers to love the journey and our terminal concessions play an important role in that journey. The opening of the Tap Room is especially unique to our customer experience as it brings local flair to the airport. We are confident that it will be well received.”

The Two Roads Tap Room is located post-TSA screening in the Gates 1-12 concourse and is open daily. It will serve a number of Two Roads beers on draft, beer flights, and food options such as thick cut deli sandwiches and breakfast sandwiches. Beers from several other Connecticut breweries will be served as well.

Two Roads opened its doors in December 2012 having earlier acquired and brought to life a vacant, 100-year-old landmark brick factory building in Stratford, CT. Its name and philosophy are inspired by the Robert Frost Poem “The Road Not Taken”-a philosophy brought to life in the beers they create using the highest quality brewing and packaging equipment. Two Roads Brewing Company’s tasting room is open seven days a week and conducts tours Friday through Sunday; for more information go to www.tworoadsbrewing.com